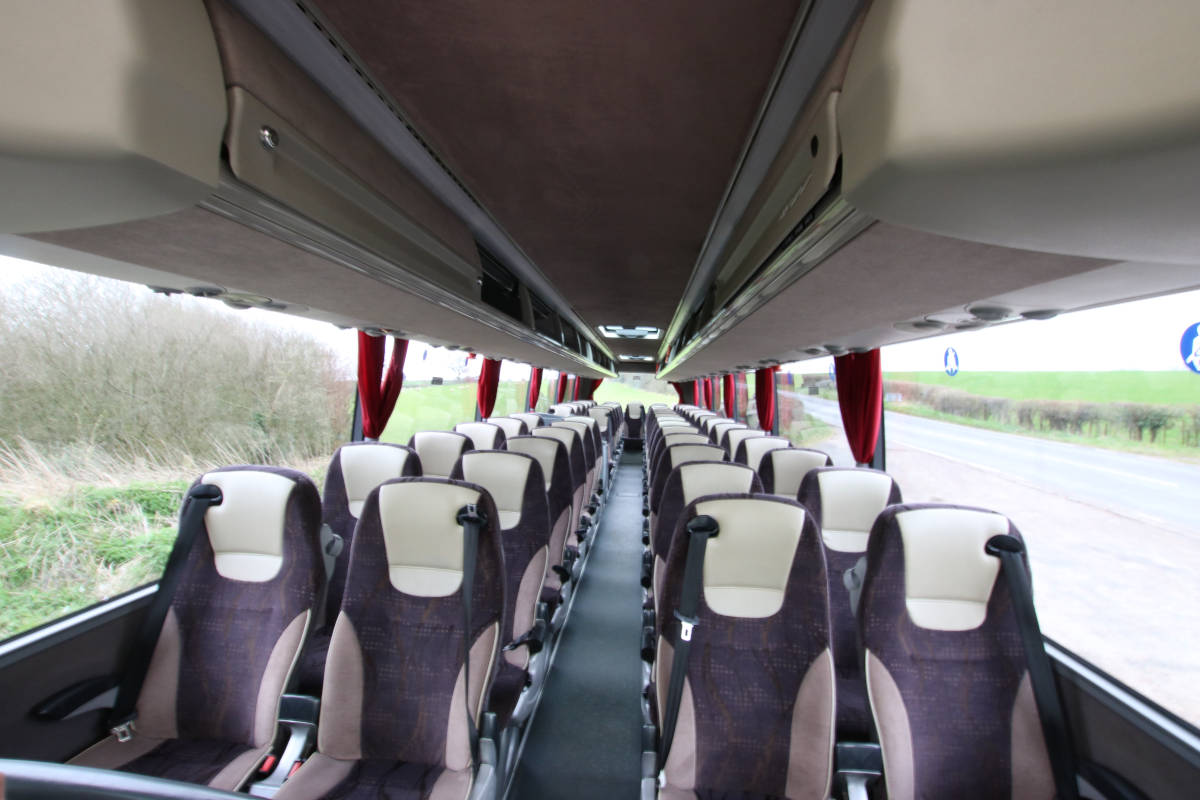 --Request Information-- --More Images Like This--Photo from Featured Project near Blakeney
53 Seat Luxury Coach, Equipped for Executive Travel
Spacious and airy inside, this 53 seater coach is ideal for transporting a large group of people who need quiet, comfortable travel so that they can get on with some work or quiet discussion on the way.

Blakeney is a small, thriving village on the eastern edge of the Forest of Dean, on the main A48 road between Gloucester and Chepstow. It was at a house called Hawfield that Thomas Stenhold was born. He was Groom of the Robes to Henry VIII and his son, but is renowned (along with John Hopkins of Awre) for publishing the first metrical version of the Psalms. The house where he was born still exists in the village. Thomas Sternhold died in 1549.

Situated at the confluence of the Blackpool and Soudley Brooks, Blakeney is a busy Forest village that was a natural site for early industry (an iron forge and furnace existed here as early as 1228). The oldest building is the 16th century Swan House, formerly an inn, although there are several 17th and 18th century buildings in the village, the largest being the early 18th century Church of All Saints. Blakeney's industrial past is recalled by several buildings, including two corn-mill; the Upper Mill, by the A48 and Nibley Mill ( a partly half timbered house with adjoining stone mill where the B4431 Parkend road joins the A48). The old Blakeney Goods Station and the imposing six arched railway viaduct were built for the Forest of Dean Central Railway, which was begun in 1856 and was intended to run from Howbeach Colliery (situated about 1mile north east of the village) to a new dock at Brimspill on the Severn, it was never completed and only ran to a junction on the main South Wales line.

During renovations on one of the houses near Blackpool Brook, a large high-status Roman villa was discovered. This building was located next to the Roman military coast road from Newnham and it not only had a heating system, tiled roof and a stone courtyard but also a slip-way on the stream, indicating it was accessible by boat from the Severn. Pottery on the site dated construction to c75AD, making it the earliest villa known in the Dean and it was occupied for around sixty years until being demolished sometime in the middle of the 2nd century. It is thought that it was the residence of a high ranking Roman official, possibly an Army officer from the legionary fortress at Gloucester.

The Church of England church at Blakeney was built in the 1800's. Before this time, the parish was combined with the village of Awre, a little further to the east and closer to the River Severn. The font is what appears to be a 15th century stoup for holy water, believed to have been removed from Awre church during the reformation and buried for safety. It was found near Gatcombe when the railway was built, and used locally as a flower pot for many years before being brought to the church at Blakeney. In the early 1800s there was a considerable non-conformist movement from the established church, and a tabernacle was built at Blakeney in 1823, a mile north of the village. This building is now used as houses. A replacement tabernacle was built in the village in 1849 (before the church of England church was built).

Use of cookies on this web site: ASC Phillips collects no personally identifiable data in cookies. However, a number of social media and search engine companies place tracking cookies without our consent or co-operation. If you wish to avoid tracking, please read our cookies policy, where you will find links to resources that will help you set your browser accordingly.
8-16 Seat Minibus Travel | Small: 36 Seat Coach Travel | Medium: 53 Seat Executive Coach | Large: 70 Seat Coach Travel | Home | Our Vehicles | Group Travel | Our Clients | What's New? | Photo Gallery | Contact Us | Data Protection | Areas Served